jmg
/
snapaid
Fork 0
Code Issues 0 Pull Requests 0 Releases 0 Wiki Activity
A utility for downloading and verifying FreeBSD releases and snapshots
You can not select more than 25 topics Topics must start with a letter or number, can include dashes ('-') and can be up to 35 characters long.
41 Commits
1 Branch
708 KiB
Shell 67%
Awk 25%
Python 6.8%
Makefile 1.2%
Branch: main
main
Branches Tags
${ item.name }
Create branch ${ searchTerm }
from 'main'
${ noResults }

This is a utility that will make it easier to find and download the correct snapshot or release. It will also fetch and verify the GPG signature and hash of the snapshot to ensure that you are getting the correct file. 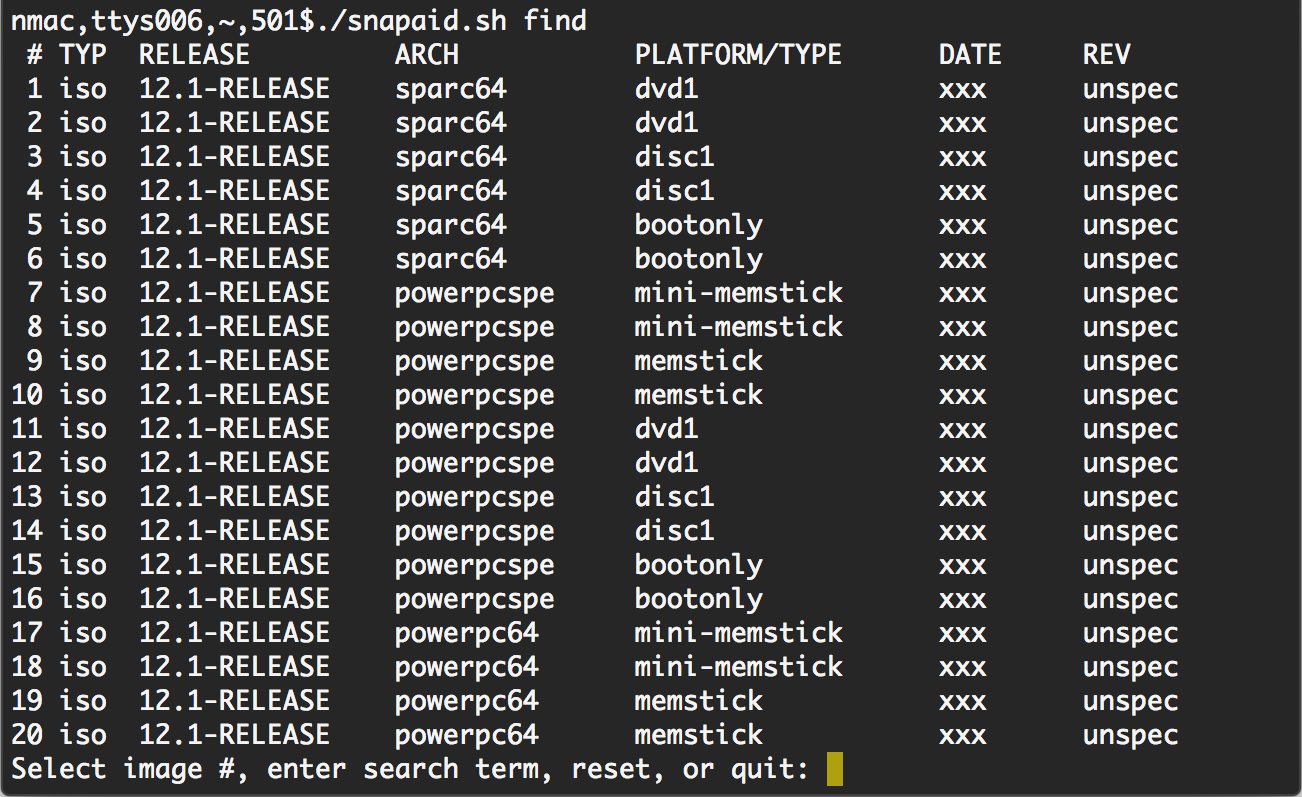 The only file needed is the snapaid.sh script. The other files in the repo are used for generating the index.

Setting up and finding a snapshot:

When running with the find argument, you can provide additional terms and/or selections as arguments. If you want to automatically download the latest FreeBSD CURRENT snapshot vmdk that is xz compressed for the for amd64 architecture, you run the command:

Each term between find and 1 refines the search, and the 1 selects the first image. The list is sorted by date, then by release, where the latest is shown first.

If you’ve already installed and setup snapaid.sh previously, you can skip the first two lines.

Setting up and verifying a snapshot or release:

Note that the provided filename MUST match exactly the released name so that it can be found in the index. It could be possible in the future to find it via shasum, but that is not implemented yet.

This repository will be signed by my FreeBSD GPG key. It is available at: https://www.freebsd.org/doc/en_US.ISO8859-1/articles/pgpkeys/pgpkeys-developers.html#pgpkey-jmg

Now that snapaid has migrated from GitHub to Gitea, you will see the verified lock icon with the commits. This is because unlike GitHub, Gitea won’t falsely show a commit as verified unless it was signed by and only by the user’s PGP key.

NOTE: The xz vs non-xz versions of some of the images are not able to be differentiated. Currently sorting rules should always put the xz version before the non-xz version.

NOTE: Only snapshots that have SHA512 hashes are included. This excludes most snapshots from 2015 and before. The tool could be updated to include SHA256, but not a priority currently, and most/all are not available for download.

The backend is just a simple text file which indexes all the published snapshots. It is built from the emails to the freebsd-snapshot list. After verification of the email’s signature, the SHA512 entry lines are extracted, the file name is parsed, and added to the complete index. The message-id of the email is in the index so that the frontend can d/l the original email and verify the GPG signature locally. The complete index is used for verifying a snapshot that has already been downloaded. Another index is also maintained which only contains the currently available to d/l snapshots. This may contain snapshots that no longer exist, as it is only updated/checked when a new snapshot is released.

The procmail rc lines that I use:

The first rule is used for RELEASE announcements. They are copied (c) so that a later rule can file them in the proper mailbox. The second rule is for the snapshots, and smiilarly organized, but the mailbox filing happens here.

The snapwrap.sh script is included in the repo, but the command to deploy the database to the FreeBSD.org servers has been deleted, but it is a simple: tar -cf - <files> | ssh freefall tar -xf - type command.